I deliberately excluded myself from the mobile gaming explosion for many years. Growing up with all the Nintendo consoles - starting with Nintendo 64, Gameboy Color and then later Playstation and PC trained me to view games under a certain lens. Deep, immersive, and needing many hours at a time. I assumed that mobile games were too shallow to fulfill my gaming craving and did not make the effort to keep up with the scene. It felt too far away from what I loved about video games.

However, that is changing.

1) I bought a decent smart phone (One Plus 3) and an IPad Pro.
2) I started building games in LOVE2D.

1) meant that I had good hardware and access to both the Play Store and the App Store. Having the platforms made all the difference as I knew I would be able to access both tablet and phone experience. (I'll confess that I was pretty late to the whole high end smart phone thing as I spent most time on my computer).

2) meant that I began to have much greater appreciation of simple games. Because it's so hard to make a game, right? And having that new found understanding made me want to try out more mobile games. I could look at them and imagine what it might be like to program them. (AAA titles are too daunting to play that exercise with).

I've been doing the obvious: checking out what's on the front page of the stores and download whatever is free to learn from. This is mostly on Android - although I've done a bit on iOS as well. It's been interesting. There seems to be an abundance of 3 in a row puzzle games paired with an Overworld that lets you overview your progress. And of course - make in app purchases or open treasure chests to watch ads. If it isn't a Candy Crush Clone then Clash of Clans inspired. Or a simple of effective physics based game or an on rails runner.

In fact, there is a fair bit of variety. Due to the sheer volume I'm know there's so much I still haven't tried or heard of. It feels like it's not so easy to discover the gems just by browsing the top plays list.

In the past months of exploring the scene, here are a few of the games that have been the most memorable.

This game takes a slightly different spin to the classic 3 in a row puzzle games. On completing a 3 in a row, the creatures merge together and evolve into new ones that can also be lined up in a row. The sound effects, pacing and variety in the level design definitely stands out as high quality amongst the over saturated genre. There's a good range of activities, from evolving a certain number of a species, to boss fights, and star challenges.

Orbit is a real gem, that I was lucky enough to spot on the front page of the Play Store. It is a simple and beautiful simulation of planets orbiting blackholes. The player controls launching planets into a trajectory and the goal is to get a certain number into a type of orbit. It's a very soothing game which made me remember my love of Mechanics in school. And it even has classical music in the background. Highly recommended. 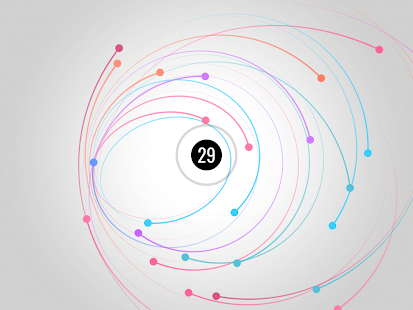 I forgot how much I enjoyed tower defense games. When I downloaded this I was surprised at how addictive it was. It follows the usual things players would expect: spend gold to buy archers, soldiers and mages to defend against waves of enemies. It's very polished and has great sound and visuals. It also has a variety of difficulties which makes it more interesting if you want to really test yourself.

I have barely scratched the surface of mobile gaming but these are my first impressions and experiences now. I am also interested to look more deeply at games by Nintendo and Square Enix that are for mobile.

Overall I would say that mobile games still feel like how magazines are to chapter books. Shallower, but there are certainly some high quality ones out there. But the fact that they are easier to get into and pick up and play can only mean that there is more time overall to spend gaming.

One of the best things about Berlin is the active gaming community, and more specifically, the game dev community.…